My mom’s name is Isabelle, but her closest friends and family call her Bella.

This has been quite a year for my mom.  She had minor leg surgery, was diagnosed with lung cancer, braved the surgery and recovery of breathing without half of one of her lungs, sold her house, and moved to Texas without ever having visited before.

I probably spent more time with my mom this year than I did in the past 5 years combined, and yet I still miss her now that she’s settled in Texas.

My mom loves word puzzles, and the last time she visited she left behind her pen – a purple ball point.  I started using it all the time as a little way of being close to her.

I used that pen when designing these socks. As I knitted the sock I realized it was symbolic of our relationship (and probably a lot of other mother-daughter relationships).  The alternating colors are me and my mom.  They’re equally represented, although sometimes we see more of one color than the other.  Sometimes the colors that fall next to each other have great contrast, and at other times they’re more similar.  Just like our relationship – sometimes laughing together, sometimes arguing, but always loving each other  The 2 row striping on the heel and toe show us at our closest.  Like the time she stayed at my house for several weeks after a bad breakup, or earlier this year when she was in the hospital.

Make these socks for yourself and dedicate them to someone special in your life.  Or share the project with another knitter you’re close to, picking out a ball of yarn from each of your stashes.  Or use sock scraps and have a momento of all the socks you’ve made for yourself and others.

And if you’re lucky enough to have your mom close by, give her a hug. 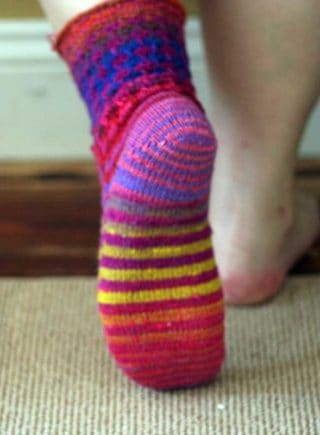 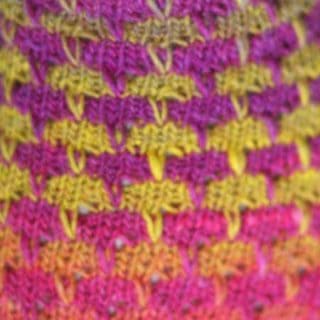 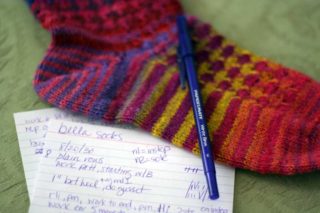 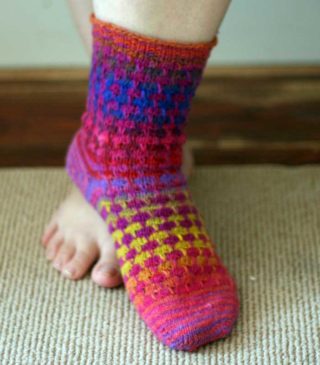 One size, 8″ in circumference.

The socks are knit toe-up using the magic loop method.  A gusseted, short row heel creates a comfortable sock, and a seeded rib tops off the cuff.

To create the stripes, split the ball into two.  Don’t try to knit from both ends of the ball – it will become a tangled mess.  The stripes are created by alternating rounds from Ball One with rounds from Ball 2.  Carry the non-working yarn along the back.

If the colors of the stripes become too similar, wind off a few yards from one of the balls until you’ve come to a color with more contrast.

Work increase rnd every rnd until you have 40 sts (20 sts per ndl), continuing to switch between ball 1 and ball 2 every 2 rnds,

Continue to work increase rnd every other rnd until you have 60 sts (30 sts per ndl), switching yarns every 2 rnds.

Setup: Switch to other ball of yarn.  Work 4 rnds plain.

Work Dip Stitch (Instep) on instep and St st on sole until 1” bef heel start, ending with Rnd 1 or Rnd 5.

RLI and LLI are left- and right-leaning increases. {read our tutorial here}

Work 1 rnd plain on instep only, so you end on Rnd 4 or Rnd 8.  Working yarn is set so you are ready to work the sole.  Make note of rnd you ended on so you can continue when working the leg.

Do not change colors.

Break other color of yarn and rejoin to begin using it for the heel.  Work 2 more sole short rows.  Cont as set, changing yarns every other row and working sole short rows until you have 11 sts wrapped on each side and 8 sts unwrapped in center.

Do not change colors.

Change colors and work 2 more back short rows.  Note that sts will be double wrapped.  Just pickup both wraps and treat them as one.  Cont as set, changing yarns every other row and working back short rows until all wraps have been worked.

Break both yarns.  Redistribute sts so you are ready to work the front (instep) sts.

Join the yarn you didn’t end the instep with so it creates a new stripe.  Move markers in 1 st so they are 7 sts in from each side.

Work gusset dec rnd every other rnd for another 5 rnds.  You will have 30 sts on the front. Work 1 rnd plain (you will end with rnd 4 or 8)

Work 4 more rnds as est (Dip Stitch on front, St st on back).

Work Dip Stitch (leg) across sts on both ndls.

Work as est until sock is 1” less than desired length.

Weave in ends.  Block and enjoy!  And then give your mom another hug.

About the Designer: Jody Richards

Jody is a lifelong knitter, long-time knit blogger, and the founder of Knotions. When she first got back into knittnig she thought it was the craziest thing in the world to knit socks. Socks?  And now she can’t think of a time in the past 5 years when she didn’t have at least 2 pairs on the needles. 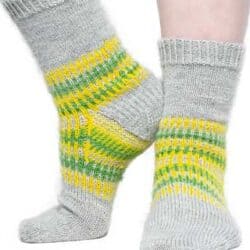 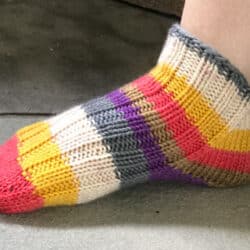