The Dodson Socks use simple stitches to create an eye-catching spiral mesh design. These top-down socks feature a twisted rib cuff, a heel flap and gusset, and a rounded toe. 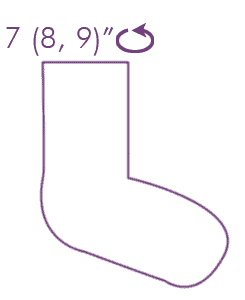 Size US 1 (2.25 mm): your choice of short circulars, dpns or one long circular to work in the round, or your desired needle size for socks 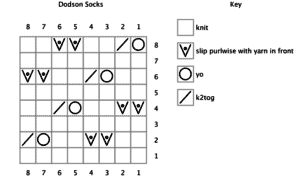 CO 56 (64, 72) sts and join in the round using your preferred method for small diameter knitting. If you are using dpns, make sure to have an even number of stitches on each needle, so you don’t end up having to do a k2tog across needles!

Pattern Rnd: Using the chart above or written instructions below, work the Diagonal Mesh pattern until sock measures 6 (7, 8)” [15 (18, 20) cm] total from cast on edge, or desired length. You can end after any odd rnd. You will complete the corresponding even rnd after knitting the heel.

Note: On the last Row 2, purl the first stitch rather than slipping it.

**For the medium size, you will begin working on the next rnd of the pattern. For the small and large sizes, you will pick up four rnds after where you left off, to account for the fact that you are working across the back half of the sts.

For this section, you will work the Diagonal Mesh pattern across the instep sts only.

For this section, you will work the Diagonal Mesh pattern across the instep sts only.

The rounded toe is worked by gradually decreasing the number of sts.

Work the two rounds below as follows:

Kitchener the remaining sts together to close the toe. Weave in ends and block if desired.

Rnd 1 and all odd rounds: K all sts About the Designer: Cait Griffin

An auditor by day, Caitlin Griffin is always anxious for a creative outlet by the end of the work week. She began knitting in 2014 and began designing her own patterns not long after, as she could never find the right pattern for what she envisioned. Caitlin enjoys the challenge of creating designs that result in an intricate and detailed product but are simple and fun to knit.

She lives just west of Boston with her boyfriend and two yarn-loving cats, Tony and Leroy. Besides knitting, she enjoys barre, yoga, reading and attending the occasional Red Sox game.

She can be found on Ravelry and Instagram as caitgdesigns. 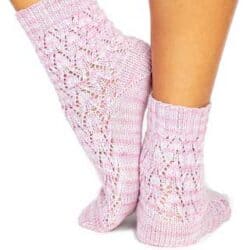 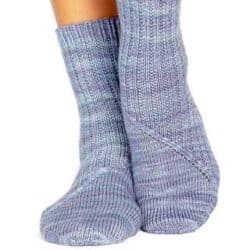 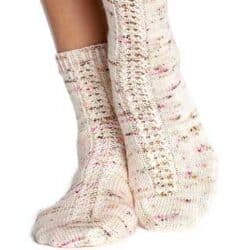