A frosty white stranded motif across a sumptuous gradient background evokes the feeling of a crisp winter evening walk in the woods. Take a warm cowl with you to keep out the cold. This pattern is worked in the round from the bottom up. If substituting the yarn, a gradient pack with 50g/1.73 of each of the five colors will be enough to work any size.

Switch to smaller needles and CC4. About the Designer: Faye Kennington

Faye Kennington lives and knits on the wild west coast of Vancouver Island, BC, Canada. Her patterns have been published in Knitscene, Knit Now, Love of Knitting and various Knit Picks books. 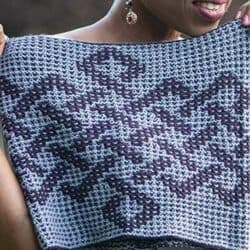 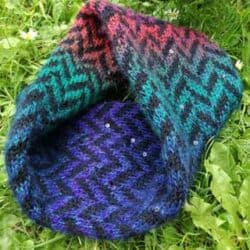