The moment I showed my mom the yarn I used in this shawl, she said: “You know this is soooo my color?!” No problem mom, this one is for you. The delicate lace is based on traditional Estonian stitch patterns, which, of course, include nupps. My mom wouldn’t have it any different! Instructions for both traditional and easy nupps are included.

The instructions for the shawl are provided both fully charted and written out.

How to Make Nupps

21 stitch markers to use in between lace repeats (optional)

Crochet hook in a size equivalent to the size of the small size knitting needles (optional, for easy nupps)

Easy nupp: Loosely work with the crochet hook [k1, yo, k1, yo, k1] into the same st to increase to 5 sts; yo and pull yarn through all 5 sts on the hook; slip remaining loop onto the right-hand ndl.

Russian BO (also called the decrease bind off): K1, *k1, slip sts from right-hand ndl back to the left-hand ndl and k2tog tbl; rep from * to end. See our tutorial.

You may prefer to work from the written instructions below.

Switch to the smaller size needles.

Work the border using the chart above of the written instructions below.

Work the body using the chart above or the written instructions below.

When increasing the width of the scarf, repeat rows 1-16 to desired width, ending after either row 8 or 16.

Please note that the sample shawl was bound off with only 10” [25 cm] of yarn remaining. Weigh your project or remaining yarn to make an estimate on whether another repeat is possible with your available amount of yarn. If not, omit rows 25 and 26.

Weave in ends and wet block scarf to shape. 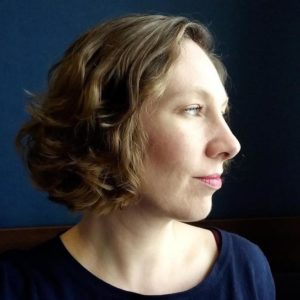 About the Designer: Susanne Visch

La Visch is a crochet and knitwear designer, living in the Netherlands.

Having a background in Industrial Design Engineering, you can say she always had a knack for designing and creating.

When she taught herself to crochet and knit, she developed a deeply rooted love for these crafts. 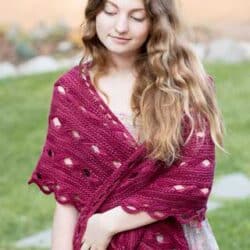 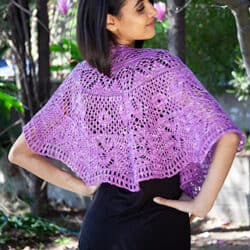 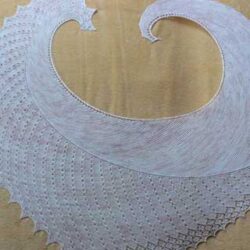