Leslie is a crocheter I know
Who wants a belt when she’s on the go
One of her goals is to learn TC*
“A place to begin” she asked of me.
It’s hot, so a small project is nice
To do in July for a small price
The pattern uses #3 thread
And no extra hooks- nothing to dread!
*Tunisian Crochet

To make a narrow piece, use #10 crochet cotton and an E-size crochet hook.

Some general things to remember with Tunisian crochet:

Working in back bump of each chain, insert hook from front to back through second chain from the hook.

Yarn over and pull up a loop through the chain. Leave the loop on the hook.

Insert hook in back bump of the next chain. Yarn over and pull up a loop through the chain. Continue across the chain.

The number of loops on the hook will be the same as the number of chains you started with.

Yarn over; pull through 1 loop on hook to make a chain stitch.

Yarn over and pull through 2 loops on the hook, repeating for each stitch across.

The last loop remains on the hook.

Continue to the last stitch.

Bring the yarn backward around the front of the vertical bar.  Hold the yarn in place with your thumb.

Yarn over making a loop around the hook.

Pull up a loop.

Note: The first vertical bar is skipped when doing the tunisian crochet rows because the loop that remains on the hook at the end of the standard return counts as the first loop of the next row.

Note: The pattern is fairly simple and repetitive.  There are 2 tss at the beginning of the row (the first loop and a tss) and 2 tss at the end of the row (a tss and the final tss). The 5 stitches in the center part of the row alternate between tps and tss.

For squared off edge

Binding off (forward only): Sk first vertical bar, [sl st into next vertical bar] across; sc in last st inserting hook as for tss.

R4: Sk first vertical bar, insert hook under next vertical bar and final st, draw up a loop and pull through all 3 lps on hook.

Sew buckle on at the starting end by wrapping the piece around the buckle and securing the foundation row to the body of the belt.

ABOUT THE DESIGNER: MARGO BAUMAN

Over the past few years, Margo has created a number of original designs. Her very first pattern, Oh, Honey! Tunisian Spa Cloth, was released as a free pattern on Ravelry in March 2015.  Later that year she was a Crochet Awards (aka the Flamies) Judges Nominee. 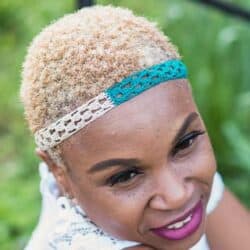 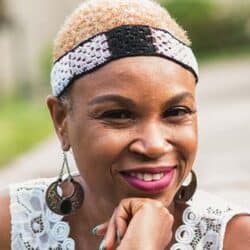 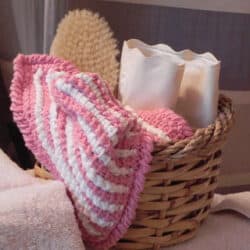