Naga Noda is a pattern for a tight-fitting beanie, featuring cables and lace. It is worked bottom up. The pattern was inspired by the naga noda or wisteria floribunda, a Japanese plant with dramatic clusters of blue-violet to red-violet flowers that is commonly found in gardens around Europe.

The head circumferences listed above take into account 1 to 2” or 2.5 to 5 cm of negative ease because lace stitches look their best when they are being slightly stretched Chart A: Lace and cable pattern

Written instructions of pattern repeat in chart A:

With smaller size needles, CO 144 (162, 180) sts using the stretchy cast on method of your choice and join for knitting in the round. Place BOR marker.

Note: From this point onwards, only work the pattern repeat of chart A as indicated by the red box.

The actual sts that you would work are:

The actual sts that you would work are:

Decrease rnd: *Work next rnd of pattern repeat in chart A, work to 2 sts before decrease marker, ssk, sm, k2tog, work sts as they appear until you reach the column worked according to chart A, rep from * to BOR; 16 (18, 20) sts decreased.

Make sure to switch to dpns or magic loop method when necessary!

Then continue the decreases as follows:

Cut yarn, leaving a tail of at least 6” or 15 cm. Using a tapestry needle, thread the yarn through the remaining sts at least twice and pull tightly.

Weave in ends. Soak the hat in lukewarm water for 15 minutes. Gently squeeze out excessive water and block into shape. About the Designer: Dots Dabbles

Dots Dabbles is a business analyst by day, knitwear designer by night. Knitting is her passion, and she has a particular fondness for socks and other knitted accessories. Her designer name was inspired by one of her pet ferrets. While designing, she is often inspired by nature and her surroundings.

You can see all her designs on Ravelry. 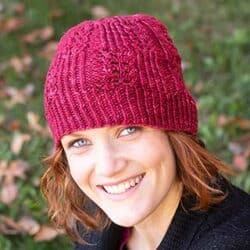 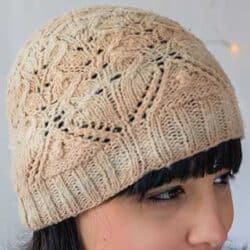 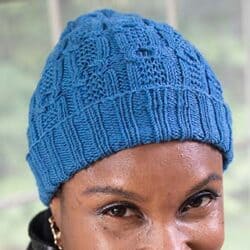