On Becoming a Knitting Savant

My grandmother had a knack for making everything look easy. She could whip up a salmon sandwich with her eyes closed, core strawberries at the speed of light, and pull weeds from a garden faster than a weed whacker. She was an efficient, tidy, and competent little worker bee, and I loved being in her company as she buzzed about.

I spent oodles of time with my grandmother, copying her actions, listening to her stories from the past, asking questions, and scrambling along behind trying to keep up. When she finally settled to watch her favourite game shows, soap opera, or hockey team, I did, too. It was the only time I ever saw her sit, and when she did, out came the knitting needles that lived in the bag on the right side of her rocking chair.

The needles clicked efficiently and rhythmically as we watched Let’s Make a Deal, The Newlywed Game, and The Edge of Night. I laughed and scowled when my grandmother did, always flicking my gaze between the television screen and the speedy needles that appeared to have a mind of their own. I was mesmerized by them, but also by her. I knew then and there that she was the most talented person I would ever know. I was confident that nobody else in the entire world could watch and respond to the tv, rock in a chair, and knit without looking, ALL AT THE SAME TIME! I mean, she had to be some kind of savant.

The crazy part about all of this is that I never once asked her to teach me how to knit. It bewilders me now when I think about it, because I did everything else she did. It’s just that when those knitting needles came out, I became mesmerized by them, lulled into a trance by the pointed metal tips that bobbed in and out. The product of all that bobbing fascinated me too, because it was like watching a butterfly emerge from a chrysalis. I watched something wonderful grow and take shape, recognizing the form of new mitten, sock, sweater, or blanket.

When I entered university I longed desperately for home. My grandmother was much older now, but still knitting and doing her savant thing. Luckily for me, I met a boy from my hometown so that took the edge off of my homesickness, but I still missed home. I guess I shouldn’t have been surprised to find myself wandering around a wool shop in the big city. On the spot I decided to knit something for my new boyfriend, the one that would later become my husband.

Don’t ask me why I thought I could knit a sweater, without even trying a simple scarf beforehand, but I did. It would give me a reason to connect with my grandmother, and the possibility of impressing John was irresistible. So, I sold some of my food vouchers for the cafeteria to a tall and hungry student from Sweden (you’ll understand why this is important in a minute), and then purchased $100 worth of the heaviest and thickest pure wool that I could find. I needed enough wool to knit a man’s sweater, complete with mittens and a matching hat. It wasn’t going to be any ordinary kind of sweater though! No, that just wouldn’t do. I flipped through the pattern books and there it was – an Icelandic sweater with a beautiful yoke! Aha! The Swedish connection was at work. 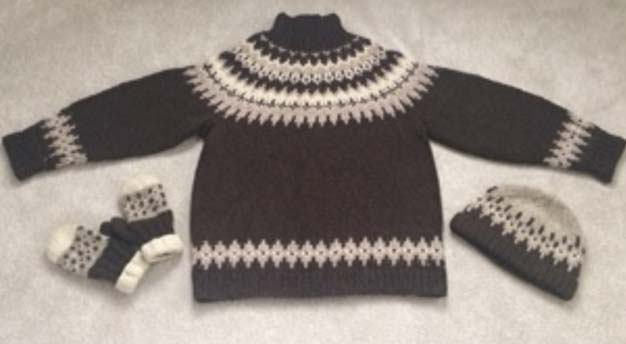 I was determined to teach myself to knit this most beautiful sweater, even though the lady in the knitting store kept talking about a yoke, and I had no idea what eggs had to do with a sweater. However, if my grandmother could do it, so could I! After all, how hard could it be, right? There was no YouTube to consult for backup, so I was on my own. Like I said, how hard could it be?

For the record, I did try. In my defense, I was studying for a couple of tests and I had yet to write an essay on ancient civilization. However, just between you and me, even ribbing eluded me. I called my grandmother and she tried to explain over the phone. It didn’t help though and the expensive wool sat in a bag until November. It was then that I finally made that now infamous call: “Grandma, could you knit a sweater for John? I promised I’d make him one. I need it by Christmas.”

Christmas Day 1985 arrived and so did the Icelandic sweater with mittens and a hat to match. The colour work was beautiful and I insisted that I made it for about … oh half a second … before admitting to John that it had been in the hands of an expert. It was gorgeous, and it still is, albeit it’s best worn on days when the temperature plummets to -40 degrees.

Early in my fifth decade of life I decided to pursue knitting classes. I was determined to achieve the success I yearned for in my 20’s. Additionally, with each passing year, the frequency of warm thoughts of my grandmother swirled in my head and heart. Knitting was my direct connection to her and I longed to reclaim it.

I attended my first knitting class announcing that I wanted to learn to knit socks. My teacher gave me a skeptical smile, indicating that I was beginning with a most challenging task. “I’m up for it!” I shouted enthusiastically, while consciously withholding my incident with the Icelandic sweater. 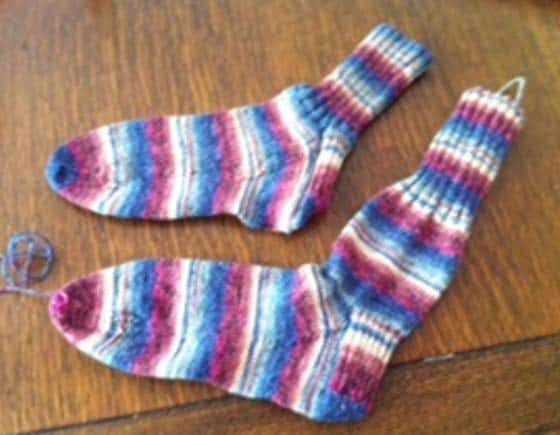 Those first set of socks have gone down in knitting history as the most ridiculous pair ever created. Again, in my defense, I was enthusiastic, so don’t blame me if I got caught up in the gusset. My knitting group still roars with laughter when we think about those socks, but to their credit, they have never given up on supporting any of my knitting projects since then.

Just so you know, after five years of knitting classes, I have mastered a few techniques. Socks and colour work are my favourite! My mother examines my projects with a careful eye and always says the same thing: “Oh, Lori, I wish your grandmother was here to see your knitting. You have her tension. She’d be so pleased.”

I realize that my grandmother’s knitting hands have now become mine own despite a most bumpy start. It turns out that her savant gene was passed onto me as well. I, too, can watch and respond to a tv program, rock in a chair, and occasionally knit without looking. Although, don’t breathe a word … there have been consequences. 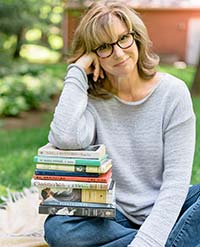 ABOUT THE Author: Lori McIntyre

Lori McIntyre is a retired primary school teacher who lives in Canada. She has a passion for writing and knitting, both of which occur daily, but not at the same time.

Since becoming a knitter, Lori has developed an obsession for hoarding all types of wool, purchasing numerous sets of needles that she already has, and ripping out more projects and beginning again, than she cares to count.

Lori has stashes of wool hidden throughout the house, and only buys wool with cash in order to protect her husband from future cardiac issues. 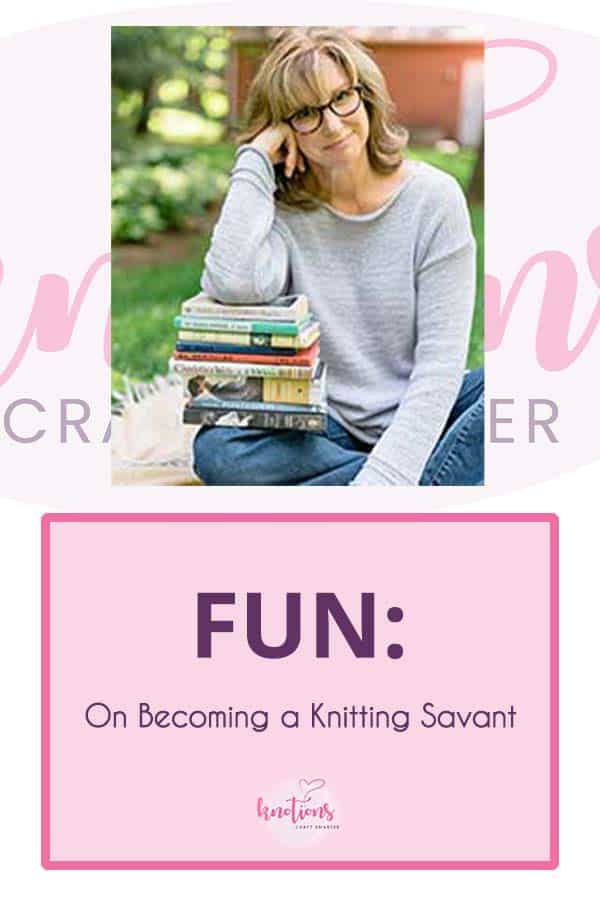