The Pythagorean Triple Wrap is inspired by the formation of 2-dimensional and 3-dimensional shapes used in Mathematics and Biology.

Understanding how polygons and other shapes work can be helpful in a variety of regular-life situations. A few examples are estimating the paint needed for a room, or calculating the square footage of your back yard or even how much mulch to order for your garden.

How Does it Work?

The design follows a point-to-point construction (mitered square), using diagonal knitting, texture, cables, lace and short row knitting techniques. It is knitted flat in two pieces and grafted together to create a rectangular shape using four shades to add interest. The occasional use of textures, lace and cables with garter make it modern with traditional essences. It’s a good stash-busting project for both experienced and beginner knitters who love to learn new techniques and play with colors.

If you’re curious about the STEM connection, please read on. I get deep in A LOT of mathematical and biological theories. So, if you just want to make a pretty wrap, scroll down to those instructions below!

I originally named this design the polygon wrap. A polygon is any 2-dimensional shape formed with straight lines used to create different geometric shapes like triangles, squares, rectangles etc. A polygon is named after how many straight lines it takes to form the shape. For example, a triangle has three sides and an octagon has eight sides. Any shape that can be drawn by connecting straight lines is called a polygon.

This design shows how different geometric shapes join together to form another geometric shape. The basic mathematical concept behind this idea is “Inscribed Square in Right Triangle”. A right triangle is a triangle that has one 90 degree angle. One of the most popular right triangles is a “3-4-5 Right-triangle,” where the sides are the ratio of 3:4:5. This is also a Pythagorean Triple, as the triangle sides are in a ratio of whole numbers. According to the Pythagorean theory, for a right triangle, the sum of the squares of the two sides that join a right angle (the legs, a and b) equals the square of the third side (the hypotenuse, c). 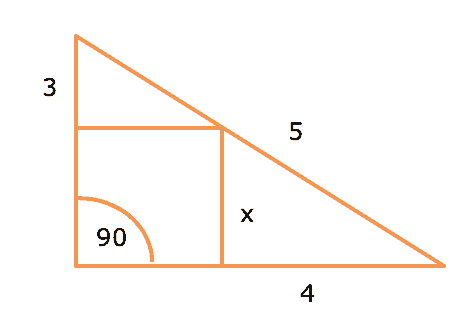 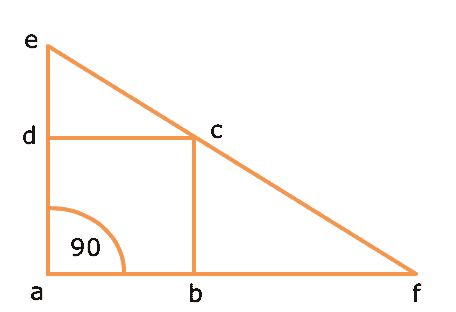 So how are all these theories incorporated into this design? The wrap starts from corner a and gradually increases to make a mitered square abcd. Then a triangle bcf is knitted on leg bc and triangle cde on the other leg cd, using wrap & turn short row shaping. After completing both the triangles, we find our right triangle aef, with hypotenuse ef. The wrap continues on this line, using diagonal knitting to create parallelogram efgh. The wrap is completed by making another right triangle aef, and grafting ef and gh ends together to create a rectangular shape.

So, the structure of this wrap is designed by combining different polygons (squares, triangles, a parallelogram and a rectangle) and using the basic mathematical (geometric and trigonometric) theories.

The body of the pattern also incorporates different knitting stitches and techniques inspired by mathematical and biological theories as well. A stitch pattern is used to represent the DNA Helix structure. A Helix is a curve in 3-dimensional space. Helixes are important in biology as the DNA molecule is formed as two intertwined helixes. The stitch pattern resembles the DNA double helix structure with cables (resembling a twisted knot or intertwined helix) that also relates to Knot theory. In mathematics, a knot is a closed curve that can be visualized as a closed loop of string. If the string has a closed knot then it would be impossible to unknot without slicing through the knot. Likewise, in biology, DNA is a complicated knot that must be unknotted by enzymes for replication or transcription. Using Knot theory, scientists can estimate how hard DNA is to unknot. It helps them to estimate the properties of enzymes that unknot DNA. Another stitch pattern used in this design is very similar to the curve lines in mathematics.

Carrying Yarn up the Side

Cable without a cable needle

-To avoid cutting yarns, in row 193, carry contrast yarns throughout the row from behind to m1R and leave there. Continue the rest of the row with the working yarn. When working Part F, carry the contrast yarns from prev row at the beginning of each row.

-In row 234, cut the contrast yarns leaving 6” tail and continue the row with working yarn to the end. Weave yarn tails in and secure properly.

-Choosing Colors: You need 4 different colors of yarn for this wrap, though you can use more or fewer. Any color combination will give you a beautiful piece of art; just remember, this is a big wrap so choose colors that compliment your wardrobe and make you feel happy and confident. It’s a great project for digging into your stash and finding something exciting. The Color Distribution table below shows which rows are worked in which colors. 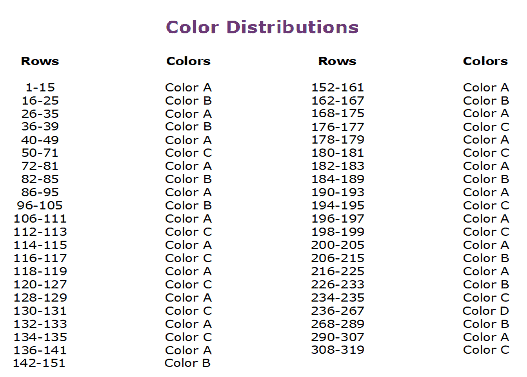 Illustration of the Wrap

Download the charts in PDF form (they’re large so they’re not good for a web page).

Work Sections 1-3 sequentially. Each consists of multiple parts with different st patterns. There are charts for all parts except A, C & H.

Sm as encountered on all rows.

Section 2: Triangles on two legs of the Square

Parts G-K create a parallelogram on the hypotenuse diagonal line of the right triangle.

Transfer all sts onto a spare needle or scrap yarn for later use. Cut the working yarn leaving 6” tail and secure by weaving it in.

Work Sections 1 & 2 to create another right triangle. Keep sts on the needle and cut the working yarn leaving tail for grafting about four times the width of the piece.

Block the finished wrap following the blocking instructions for yarn.

Naurid Kashpia Senjuti is a knitwear designer from Dhaka, Bangladesh. She started her career as a corporate lady but soon after her child’s birth she became a stay-at-home mom when she rediscovered her passion for crafts and hobbies. Her three-year-old super-active daughter is her inspiration for knitting, crafting and crocheting. 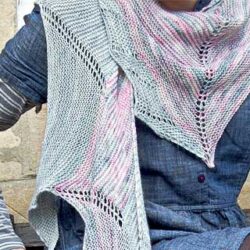 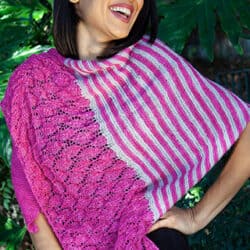 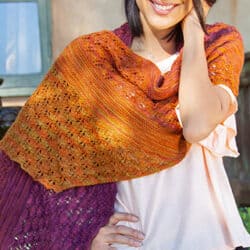 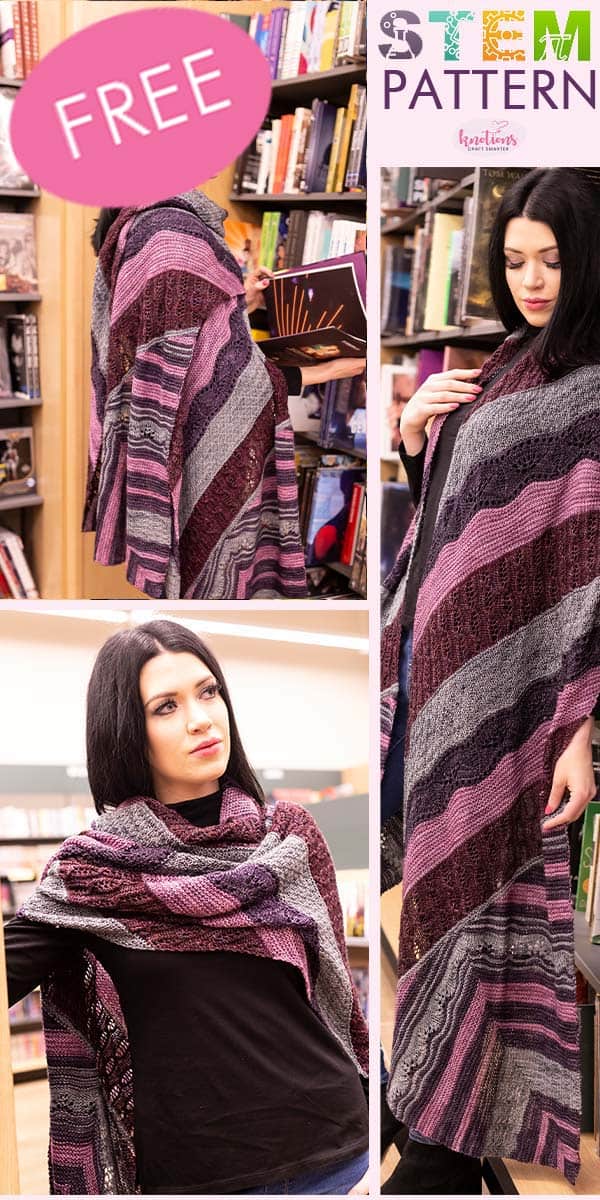