My neighbor grows Hens and Chicks at the edge of her lawn between rocks. They charm the eye even in winter, so they showed up in my knitting.

The hexagonal motifs can be arranged into various shawl configurations. In different colors they can be stash busters, the center out construction means that gradients do fun things.

How to work an Improved SSK

Size US 5 (3.75 mm): dpn or circular depending on your preference for working in the round

1 Hexagon Motif measured point to point through the center = 6” [16 cm] in pattern after wet blocking.

CDI: Knit into the back, then front of the same stitch.  Pick up the vertical strand of yarn over the two stitches just made, and knit it – 2 sts inc’d.

Make a loop about 1″ / 2.5 cm in diameter. * Insert the right needle into the loop, wind yarn around needle as if to knit and draw loop through, yo; rep from * until you have reached the required number of sts. After a few rounds you can pull on the tail to tighten up the original loop.

This pattern is worked modularly.  Each hexagon is cast on in the middle, then worked in the round to the edge.  Each motif is bound off, then sewn together using the tails.

Using the Circular cast-on, CO 12 sts. Be sure to leave a long tail because you’ll be wrapping it around the circular cast on and weaving in it 3 times (this is noted in finishing but we wanted to mention it now). Pm for beg of rnd and join in the rnd, being careful not to twist sts.

Partial Rnd 24: K9.  (This puts your yarn tail on a corner ready to sew to the other hexagons.)

Bind off.  Weave in the CO tails threading it through the initial CO loop and continuing around and around about 3 times through to get a raised button effect.

Block Hexagons to 7 1/2” [19.5 cm] from point to point through the center. They will spring back to finished size when they are dry, but the holes will stay open.

Pin the motifs together, matching the points of the leaves, following the Construction Chart below, and the BO tails at the start of the arrow.

Starting where indicated, sew the motifs together using mattress st, following the direction of the arrow around for sewing order. Weave the yarn ends in the seams. Lightly steam block the finished shawl to flatten the seams and tidy the geometry. 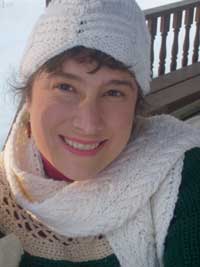 About the Designer: Christine Guest

Christine Guest learned to crochet in Pioneer Girls Club, but not to read patterns until her teens.

She taught herself to knit from a library book. In college she knit for classmates willing to buy yarn and be measured.

She studied chemistry and mathematics, then worked as a lab technician, math tutor and coffee barista. She currently homeschools her youngest children.  Her patterns are available on Ravelry or you can read her blog.

The local librarians know her by name, but she still has overdue knitting and crochet books. 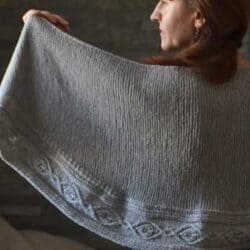 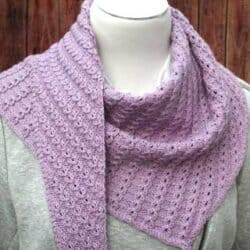 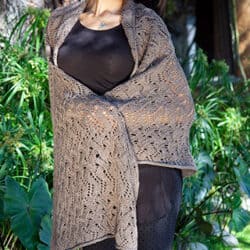