Standard Bind Off (the ending)

This is the bind off that you’ll do most often. It’s a nice and easy one and you should learn it!

How to Do It

Setup 2: Pass the second stitch over the first.

Step 1: Knit the next stitch on the LN.

Repeat these 2 steps you’re just have 1 final stitch remaining on the RN.

Cut the yarn and pull it through so there are no loops remaining.

Hold the knitting in one hand and the tail in the other. Pull on the tail to snug it up nicely. Doing this should *not* pull at the rest of the fabric. If the fabric gets mis-shapen, you’ve probably pulled it more you shouldn’t have.

Once you’re done, the BO will look like this

All bind offs are abbreviated as BO.

The Pros and Cons

Bind offs are – in general – slower to work than the standard knit stitch. Just know that it’s the case and don’t expect a bind off row to go as quickly as a knit row.

Easy to make it too tight

It’s hard to pull out a bind off and get it back on the needles!

Given this, we STRONGLY suggest that you practice on a swatch first. Just CO 10 sts, knit a few rows and then bind them off. Once that’s done, test the stretchiness of the bind off.

If you’re working it loosely enough you’ll be able to stretch it without feeling like that row is tighter.

Don’t be discouraged if it’s tight at first! In fact, if it wasn’t tight, I would say that it’s *very* unusual! 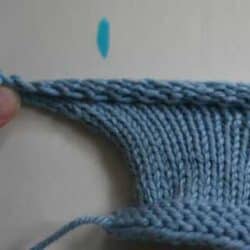 How-To: Decrease Bind off or Lace Bind off 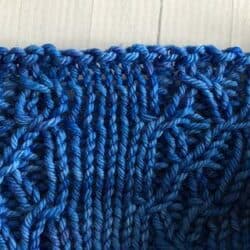 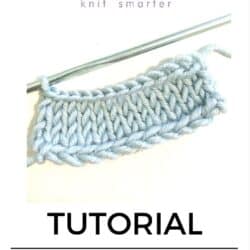