How to Knit the Honeycomb Stitch

CO an even number of stitches.

Note that this stitch is done in the round. Working it flat WILL NOT WORK with the same instructions.

Rnd 2: *P1, p2tog w/strand behind and below (created from the k1b); rep from * to end of rnd. Because you’re doing the p2tog with the strand below, it’s not a decrease in the traditional sense. This round does NOT change the stitch count.

Confused about that second strand that you p2tog? Here’s a pic:

Rnd 4: *P2tog w/strand behind and below (created from the k1b), p1; rep from * to end of rnd. Again, the p2tog does NOT change the stitch count since it’s worked with the strand below.

After we’ve worked several rows, it’s clear just how plump this stitch is! 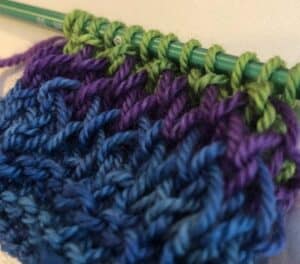 As you can see below, every 2 rounds looks like just one round has been added. So, even though I worked 4 rounds of each stripe, it only looks like 2 rounds. That’s the nature of the knit 1 below.

Here it is after we’ve worked 12 rounds of the Honeycomb Stitch. To be clear, even though it was a small circumference, the swatch was worked in the round.