[tutorial] Pick Up Stitches for a Heel Flap

This tutorial will teach you how the pickup stitches on a heel flap.

The number of stitches that you pick up and knit will be the same number of RS rows you knit on your heel flap, plus 1 extra stitch (the extra stitch is important for avoiding that hole where the flap meets the rest of the sock).

As always, follow the instructions contained in your pattern.

We’re assuming you’re starting by picking up stitches on the right-hand side of the heel flap.

With the left needle,  pickup stitches from your heel flap.

Step 1 – Insert the left needle into the front of your first heel flap stitch. 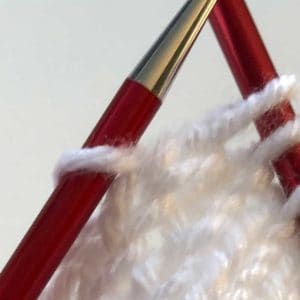 Step 2 – Once the needle is inserted, wrap the working yarn around the RN and pull it through. 1 more stitch on your RN and 1 stitch picked up. 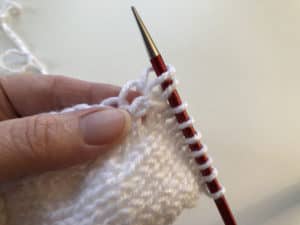 Step 3 – Continue picking up until all of your heel flap stitches have been worked.

Step 4 – Next, pick up one extra stitch where the last of your heel flap stitches meets the top of the foot of the sock.

You’ve now picked up stitches along the right-hand side of the heel flap.

Step 6 – Knit across the top of the foot of the sock and after completing this you will reach your next set of heel flap stitches to pick up.

Step 7 – First, pick up that extra stitch just like you did on the other side.

Now, repeat Steps 1-3 on the other side of your heel flap.