I create a stronger design when my mom’s involved. She’s the one who taught me the love of ALL crafts. She taught me how to embroider at age 7 (and I made a whole bunch of embroidered pieces), sew at age 10 (and I made my prom dress at 16), paint (no idea the age) and do calligraphy (also no idea of my age).

Like all self-respecting teenagers though, I had to do the one craft that she didn’t do. Crochet (and then knit). I started with crochet and branched to knitting (both self-taught at 12). It only bugged me after some time that my stockinette didn’t look as neat and tidy as what I expected. There was no google (or even Yahoo or AskJeeves or HotBot – remember those?). Well anyway, it turns out that I was twisting my knit stitches. But, since I only had Aunt Betty’s books to “ask”, it took me a while to figure that out.

Back to current times…I was smack dab in the midst of quarantine in April 2020 and I wanted my mom’s opinion! Well, if I couldn’t have her with me, I could at least take pics and email them to her instead. I did that and she told me that this one was a bit dark and that one was “ok” (and we all know that’s mom-code for “I don’t like that”).

I sent her TONS of pics, and she kept asking me questions that just further spurred me on to do more. I sent her WIP pics, FO pics and photoshopped pics of plans.

But, in the end, like always, my final product was better because she was involved – even if I did a few things that she didn’t care for in my squares.

A bit about Mom 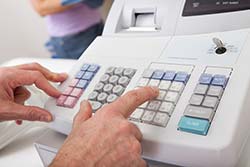 Mom opened her store when I was 19 and named it after my late dad (I wanted to include a pic of the sign but it turns out that we didn’t take any). I worked in the store as much as I could and soaked it all up.

I learned all kinds of crafts and also how hard a small business could be (and, also, how rewarding). I suspect there were lots that I learned that I ended up using in Knotions. And certainly, things that have made me a better person (I hope).

I also get my love for gardening from her, but since this is about crafts, I won’t digress. That’s Jody-code for “don’t ask unless you want to be bored to death and hear about things like ‘what’s the perennial of the year?’*”.

I did design my Bella socks with her in mind and named them after her (if you read the intro, she moved back near me since then and she hasn’t had a single relapse either). And regardless of the namesake of these socks, they’re really a great tribute to mothers, daughters, sisters and friends. If you want to make someone you love a bit of your knitted-world, the Bella Socks can be a great idea.

A gift from Mom and her Friends

Mom’s friends know that I knit and crochet, and they’ve given me several gems in the process.

One of them was this book: 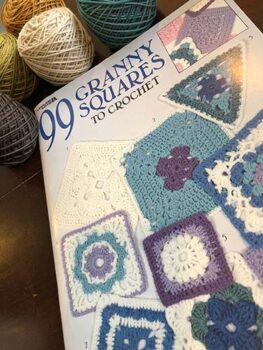 I absolutely LOVE this book! It was published in 1988 and I have no idea if there’s a current printing of it. Regardless though, this book is an awesome compilation of squares! As I read through it, the tech editor in me can’t help but wonder “why did they stop writing instructions in this concise way?“. There’s no way a 99 square book would be just 58 pages by today’s standards. But, that diatribe will need to wait for another day as well (or I’ll just complain about it to several friends).

Every time I look at these squares though, I think of Mom and how she gently guided me and made them better. I smile every time I see them.

Given that, it was clear to me that I needed to do something with them so I could see them all the time! My plan is to put several of them together and hang them on a dowel to top a window in my office. (I say it’s my plan because I currently own the dowel but haven’t done anything else with it)

Sometimes, the apple doesn’t fall far from the tree. Even if I try my best to avoid it.

* there are many POY categories, and my favorite for this year is the Russian Sage

About the Author: Jody Richards