[article] Opening a door to a new life

When we talk about taking a new direction in life, we often talk about it in the sense that we opened a door to a new life. Often this is a metaphor. But sometimes you have to take it literal. And step through an actual door for new opportunities to find you. I have experienced a lot of growth over the last five years. And it all started with stepping through the door of our new flat.

Moving to Leeds and an unexpected loss

When my boyfriend had to change universities for his PhD, I very much decided I wanted to go with him, even though we had only been together for a few months. Nothing was keeping me in Surrey, where we had met during our master’s degree. I was so excited about a new start in a part of England I had never been to. But it was not meant to be quite like I imagined it.

The week before our move my dad passed away unexpectedly. And so instead of moving to Leeds I returned to Germany for his funeral. I had only packed the most necessary clothes and some knitting. Leaving everything else to be packed up and moved by my boyfriend.

By the time I stepped through the door of our new flat I was starting a different kind of new life than I had dreamed about. I was starting a life without my dad in it. He had always been very supportive of my knitting and spinning yarn; a hobby that I had only recently picked up. A few months earlier, he had even driven all the way to the UK to bring me a second-hand spinning wheel he had found for me.

I knew dealing with my loss would not be easy. Living in a new city, working from home and having no local friends made it more difficult. The excitement of starting a new life in a different city, to make it our home, had disappeared.

It was not an easy time and I asked myself often if I had made the right decision. Unsurprisingly, my knitting and spinning became ever more important. Making something physical and beautiful gave me time to think things through and to help me find a place in this new life. A few months after our move, Frenchie from Aroha Knits did her ‘five shawl challenge’. I decided to take part, keen to learn a new skill. I loved the creative opportunities of the shawl shapes so much. This was the first time I thought I could design myself.

Designing had always been something I wanted to try at some point, but the time never felt right. Either university was in the way or I didn’t feel I had enough knowledge to start. But the loss of my dad had shown me that life can be very short and if I wanted this, I should simply start designing. And that’s what I did.

I learned so much about knitting and myself in the months after the decision to give designing a go. I loved it so much and the new confidence I got from it helped me feel at home in Leeds and to make new friends. I was able to learn how to live with my grief while moving on with my life. Later on, it even helped me when I was looking for a new job, as I realized working from home was not for me in the long term. With luck on my side, I landed a job at Rowan yarns, where I still work today. Moving to Leeds gave me the opportunity to work in an industry I love.

Opening the door to our new flat was not what I had expected it to be like. It involved a lot more heartache than I had thought I would have to deal with when making the decision to move. Ultimately, moving and stepping through the door was the best decision I could have made.

You never know when you will be offered the next opportunity to open a door (whether it is real or a metaphor). And it might not even be the one you thought you were going to go through. But I have learned that something positive will come of it. It might not be what you expected or wanted, and it might even take a long time. But in the end, it will be something that will move your life forward.

So, next time a new door presents itself, step through it (and make sure to bring your knitting)! 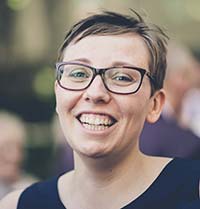 About the Author: Annika Andrea Wolke

Annika is a knitting designer with an ever-growing collection of hand knitted shawls. Originally from Germany, she is now living in Yorkshire, a part of England with a rich textile history and many sheep. Annika learned to knit at university and since then she has hardly been seen without knitting needles in her hands. 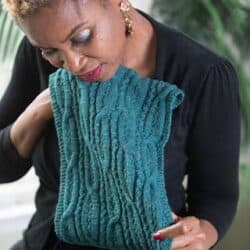 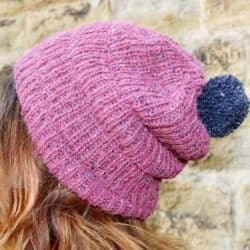 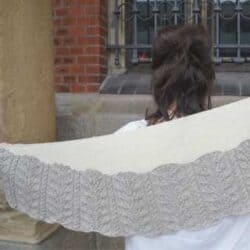