Cowls are SUCH a great way to learn about things! It’s relatively small, quicker to make, and the potential things you can get out of it are HUGE! 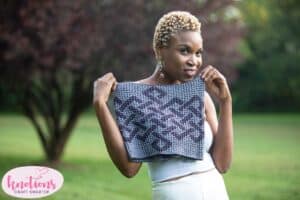 A single loop will be the smallest size to make. It’s really just a tube that you’ll wear around your neck. 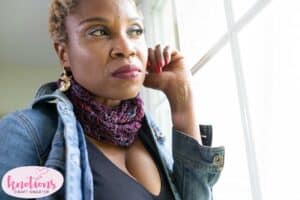 This is roughly twice as large as the single loop, and you get to twist it and bring it back onto your neck a second time.

This also means that both the RS and WS will be visible, so consider that as well. 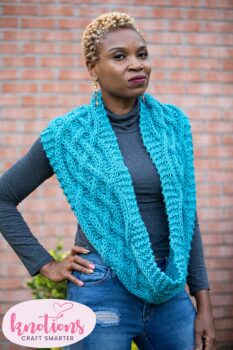 The infinity cowl is basically an infinity scarf, but the two ends are joined. Because of the join, you don’t have to contend with those ends.

The type of cowl that you choose will likely be driven both by your own preferences and also the type of stitch pattern you’re using.

For example, for me, I don’t want to contend with the added bulk of an infinity cowl. If I lived someplace really cold, that might not be the case though. In other words, your mileage may vary.

At its simplest, the cowl is really just a big rectangle. The width doesn’t vary along the length of the piece. This way, choosing to make a cowl from other things a great choice.

What to do where the Cowl Joins?

You have to figure out what you want to do in order to join the two ends together.

Simplest Join (crochet)– you have a few different options, and we outline all of them here.

Seamless Join (knitting)– Grafting (or the Kitchener Stitch). You’ll need to plan for this because it’ll need you to start with a provisional cast on

Button Band (both knitting and crochet)–work around an inch and a half of garter stitch or single crochet at each end. Make buttonholes at the one end and sew buttons at the other. This has the advantage that you could button it after it’s on (particularly useful if you’re concerned about messing your hair). This also allows you to work it flat – it’s never worked in the round.

Here are a few ways to look at cowls in everything you see.

Cowl from a Garment

You might see a great garment, but you don’t want to take on all that work! Well, a cowl can be a great way to get to use some of the things you like but in a much simpler way.

Cowl from a Scarf

This might be the easiest way to make a cowl from something else. Since a scarf is basically a cowl hybrid, making it into a cowl is easy!

You’ll need to figure out what you want to do where it joins.

Cowl from Something Else

Let’s say you found maybe a pair of mittens that you liked. Or, maybe some socks. But, you don’t want to make either mittens or socks. A cowl could be a great alternative!

Look at everything through a different lens

Now that you know about the cowl trick, almost everything can be seen through cowl-colored glasses. Like a certain stitch pattern? Or a colorwork chart? A cowl can be a great (and easy) way to get that initial fix without spending TONS of time on it.

New yarns for the summer months! Swatches, gauge a

This shawl by @vivacr0chet takes the form of a lar

It's so easy to slip into fitness goals that are r

We’ve been in love with the gorgeous gradients o