The inspiration for this design came during a trip to San Francisco.  While wandering around the city, I inadvertently came upon Lombard Street and was fascinated by it.  The stitch pattern used in this design reminds me of hilly, winding Lombard Street. 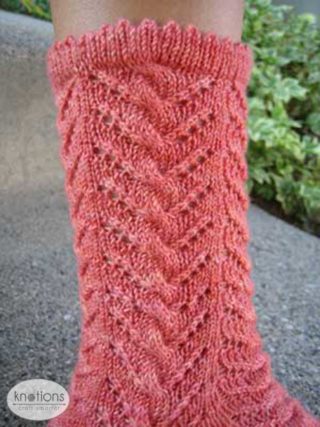 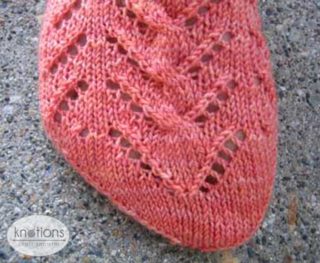 32 sts = 4 inches (10 cm) in stockinette stitch knit in the round.  Because this sock is not particularly stretchy, I can almost guarantee it will not fit if your gauge is tighter than 32 sts over 4 inches.   Therefore, it is important to work a gauge swatch before you begin.

worked over the instep sts only

worked over the instep sts only

Loosely CO 64 sts.  Divide the sts equally onto 4 dpns (16 sts on each needle).  Join into the round, being careful not to twist the sts.

It is very important that you cast on very loosely.  I usually hold two dpns together and cast on over both.  Carefully remove one needle before transferring the sts to the remaining dpns.

Rnds 1-6: Knit.
Rnd 7: Yo, k2tog; repeat from * to end of rnd.
Rnds 8-14: Knit.
Rnd 15: Fold the hem to the inside of the sock along the eyelet round.  Place the loop of the first cast-on st onto your left needle and knit it together with the st on the needle.  Repeat this to the end of the rnd.  If you find this method too difficult or fiddly, just turn the hem to the wrong side after you’ve completed the sock and baste it to the inside of the sock.  Make sure to sew it very loosely or you won’t be able to get the finished sock over your heel.

Because the patterning is continued down the instep, it is necessary to follow the heel set-up rows carefully or the instep stitch pattern will not be properly centered.

Repeat Rows 1-4, eight times for a total of 32 heel flap rows (not counting the set-up rows).  The heel flap should measure approximately 2.25 inches.

Continue in this manner, working 1 additional st before decreasing on each side, until all the sts have been used up.  You should have 18 heel sts remaining on your needle and the right side of the sock is facing you.  Knit across these 18 sts.

Using Needle #1, pick up and knit 17 sts along the side of the heel flap.

Pick up and knit 17 sts along the other side of the heel flap and knit the 9 sts from Needle #3.

Work the gusset decreases as follows:

Repeat these two rnds until you have decreased back to 64 total sts.

Knit all sts on all needles

About the Designer: Susan Lawrence

Susan is an ocean-loving Bostonian, transplanted to the landlocked state of Utah. She has a well-documented weakness for sock yarn and an obsession with knitting and her relentless efforts to spin up her fiber stash.

You can find her on Ravelry under the user name Susan. 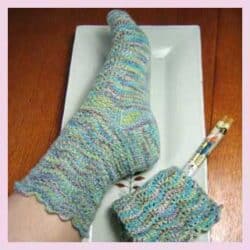 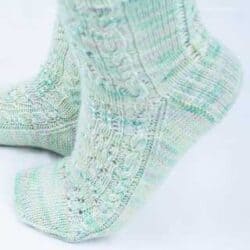