I love knitting socks, and I adore twisted stitches, so it was only natural I would eventually combine the two. This pattern uses a motif that might look a little bunched and plain on the needles, but opens up into a lovely double diamond pattern when on the foot. The pattern itself is continuous around the leg, with no visible start or end.

Socks are worked top down, from cuff to toe. Recommended method is to use one large circular needle; knitter is free to use double pointed needles if preferred, but should be aware that the Twist motif will require transfer of stitches between needles once per pattern repeat.

When doing Twist chart, knit all Knit stitches through back loop for better visual effect. 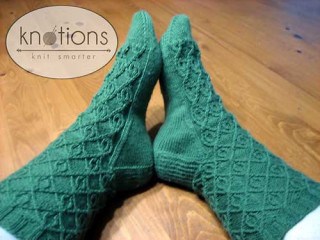 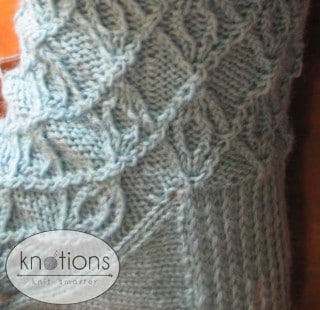 CO 80 (88) stitches. If using DPNs, divide evenly between four needles Join to work in the round, being careful not to twist.

Work Twist pattern as per chart A until leg is approximately 6” from cast on row, ending with row 16.

Notes
Rnds 9 and 10 may be a bit confusing at first, because the twist motif in this pattern is continuous around the sock, so at this point, the first and last stitches of the row are twisted together, as follows:

Rnd 10: Because you twisted the first stitch with the last stitch, you do not knit the first stitch again (this is designated by the completely black square at the start of this row in the chart).

Setup: P1 (3), and slip the newly worked st(s) to the previous needle.  The heel flap is worked on the next 38 (42) sts.
Size Medium: Slip the 39th st to the next needle to allow you to work just the heel flap sts by themselves.
Size Large: You will need to slip one stitch from the other needle onto the active needle in order to have 42 active sts.  You will have 46 sts on the other needle.

Repeat these two rnds until only 38 (42) sts remain on heel flap. Then repeat Rnd 2 until foot measures about 2” less than desired length.

Repeat these 2 rnds until only 16 sts remain.

About the Designer: Jennifer Crawford

Jennifer Crawford learned to knit just a few years ago and has been obsessed with yarn and pointy sticks ever since. She lives in California with her husband and six yarn-stealing cats, and blogs about her knitting here. 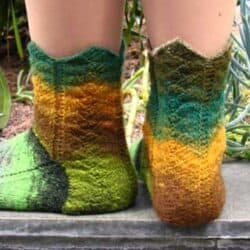