Sunny days, blooming gardens and sweet cotton fabric were the inspiration for this little girl’s sundress.  The bodice is knitted in DK-weight cotton, then a skirt made from lightweight fabric is sewn on, speeding you over the finish line so you can enjoy the nice weather, too!  Extend the life of the dress by wearing it over a long-sleeve T on cooler days.

sk4tog:  Sl next 4 sts , one at a time, as if to knit; insert left needle into the front of all 4 sts and knit them together

Bodice is knitted in the round, from the bottom to armholes; then the front and back are knit back-and-forth separately.  Remember to switch the even/WS rows to P when you discontinue working in the round and begin knitting back-and-forth.
The fabric is seamed to form a circle, then sewn to the bottom of the bodice to create the skirt. 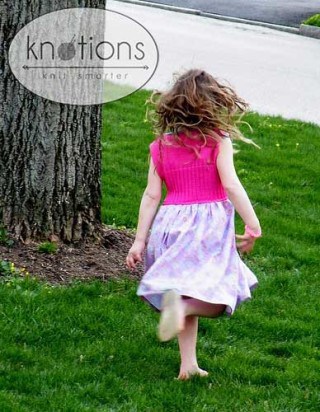 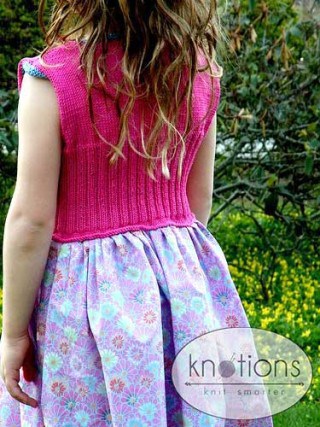 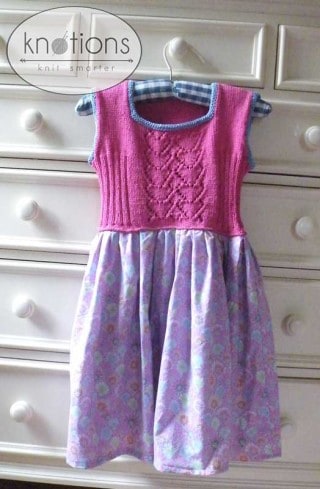 Divide for front and back

You will be working on first 74 (80, 86) sts (back sts) only, discontinuing ribbing and working in st st.  Place rem sts on waste yarn or a spare needle while you work back sts only.

Prewash fabric if desired, and iron.  Laying fabric out with selvedges running vertically, cut fabric into half across the horizontal.  Place one piece of fabric face down on the other, lining up selvedges and making sure that patterns are aligned the same way.  Sew 5/8 inch seam on each selvedge edge to create skirt.  Align each seam with the side of the knitted bodice.  Using basting stitch or pinning by hand (whichever you prefer), attach skirt to bodice, creating gathers evenly.  Adjust if necessary, then carefully sew by hand or using machine.  Remove pins or basting stitches.  Hem to desired length.

About the Designer: Carol J. Sulcoski

Carol J. Sulcoski is the author of Knit So Fine and Knitting Socks With Handpainted Yarns (both published by Interweave Press), and she has designed for Knitty.com; Big Girl Knits; JCA/Reynolds; and KnitScene.  She blogs at Go Knit In Your Hat, where her “No-Bull Book Reviews” are a popular feature.  She is proprietress of Black Bunny Fibers, where she sells handdyed yarns and spinning fiber. 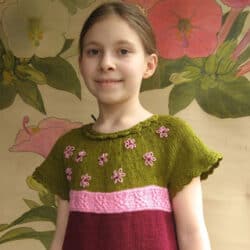 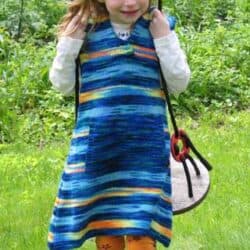 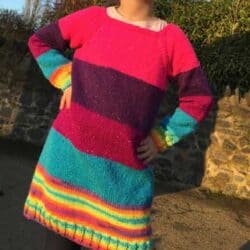