This is an easy way to start a knitting project. It’s not often-used because it can sorta melt into the rest of the work and disappear. It doesn’t give a firm edge.

Having said this, it’s a good one for you to know how to use, and it’s great for other uses (more on that below).

How to Do It

Step 1: Wind the yarn this way with the yarn tail UNDER the rest.

Step 2: Put the Right Needle (RN) in the middle.

Step 3: Put the loop on the RN. Hold it with either your thumb or your forefinger so it can’t twist around the needle.

Step 1: Take a small section of yarn and pinch it between your thumb and forefinger.

Step 2: Twist it. Note where the needle is too!

Step 3: Put it on the RN and tighten it. You shouldn’t put ANY CO sts right next to each other because it will make that edge not stretchy. I use my forefinger to create a gap between each stitch.

There is no special abbreviation for a thumb cast on. But, if you’re instructed to cast on stitches (sts) it will be abbreviated as CO.

The Pros and Cons

Some Cast Ons require you to hold the yarn a certain way and to wrap and turn the needle a bunch. The Thumb Cast On is a simpler way to get loops onto the needles for working that next row.

There are several other cast ons that you can do:

Harder to knit in it

While it *is* easier to get those loops onto the needles, it can be more of a challenge to knit it. The stitches might even wind and twist around the needle.

An easy way to address this is to hold the stitch with your left thumb. This way, you stop it from winding around.

It might also become tighter and therefore, harder to get your needle into it. Make sure that your needles are close to each other so they’re not taking up the slack with the yarn that’s between the two needles. 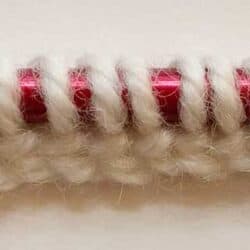 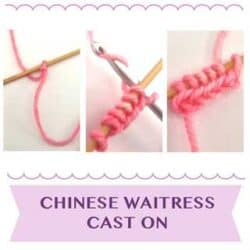