When Winter Winds Blow is a cozy cowl knit with two 400-430 yard skeins of your most luxurious fingering/sock weight yarns. This pattern really works for variegated yarns. You could also use the colors of your favorite sports team for a fun way to show off team pride!

It is cast on provisionally, worked in the round forming a tube, then the ends of the tube are Kitchener grafted together to form a continuous loop. It can be worn as a single loop or the Long size may be doubled for a cozier fit.

There is no wrong side because it is a closed, tube-shaped cowl—the snaggy, ugly part is hidden inside the tube!

This is a great pattern to knit while you’re commuting on the bus/train, sitting in waiting rooms, or binge watching your favorite tv shows.

My hope is that the circular, rhythmic motions of knitting will soothe your mind without boring you as each row is different. If you can read your knitting, you can memorize the pattern to free yourself from having to refer to a pattern.

When you’re finished, you’ll have a double layer cowl that’ll keep you toasty and warm when winter winds blow.

Skills required to complete this project: Two Size US 6 (4 mm): 16 or 20” circulars and two cord stoppers (optional, but will make your life easier when grafting) 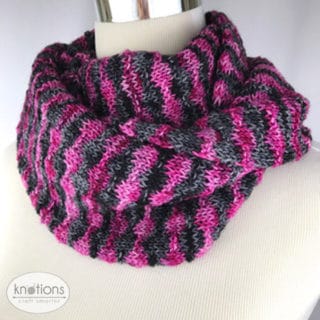 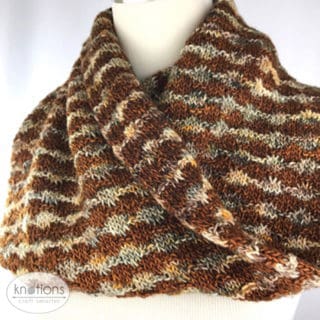 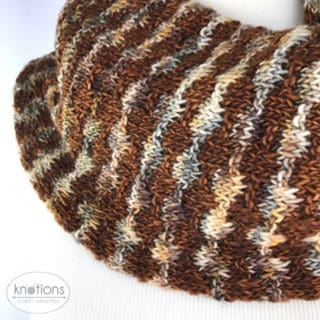 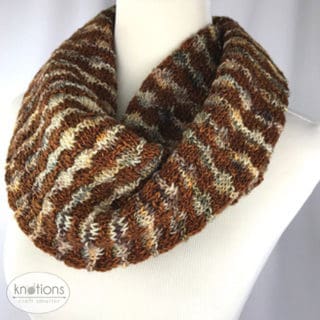 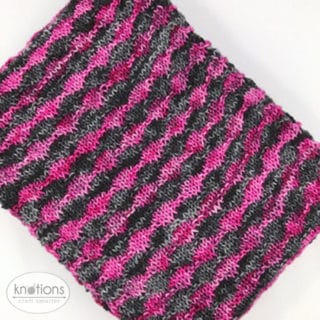 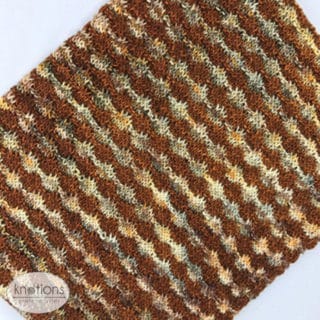 Working the color changes: Don’t cut your yarn between color changes. Just bring it up the wrong side and when changing back to the color, just snug it up to pick up any slack. {Read our tutorial on carrying yarn up the side}

Weaving in ends: If you are using scraps or mini skeins for your CC, you may want to weave in ends as you go along so it’s easier to get to them. All ends should be woven in (with the exception of the working yarn end) prior to grafting.

Grafting: The three-needle bind-off could be substituted for Kitchener grafting, but it will create a ridge (on the inside) and the seam will not be as invisible as the Kitchener method.

I highly recommend this video tutorial on the crochet provisional cast on by Knit Purl Hunter because it shows you how to do the cast on as well as how to pick up the stitches and remove the waste yarn when you’re ready to bind off:

CO (Short: 144 sts; Long: 90 sts) with MC and waste yarn using your preferred provisional CO method. (This becomes your Row 1.) You may want to look at our tutorial on the crochet provisional cast on as well. Continue with pattern starting on Row 2. Place the working stitch marker on your needle and join in the round taking care not to twist your stitches.

As recommended in the video, place one removable stitch marker on the stitch (you’re marking the stitch) at the end of the needle that has the working yarn attached to it. You will graft in MC with the Kitchener method taking care not to twist the ends of the tube before grafting them together into a deflated inner tube shape. You’ll be grafting starting with the outside edges of each end of the tube.

With the second circular needle, pick up the MC sts from your provisional CO and place the other removable stitch marker on the first stitch of the front needle. When you’ve picked up all the stitches, count to confirm you have the same number your CO required. You’ll need to have the same number of stitches on both circulars in order to Kitchener graft without an interruption of the pattern design for the invisible join.

If you haven’t done Kitchener in the round before, I highly recommend proceeding with Kitchener grafting in a quiet environment with no distractions.

Illustration for kitchener set up.  The working ends of the needles are on the outside of the tube. Thread your tapestry needle with the end of your working yarn, then hold your needles with the working yarn needle (the one with the removable stitch marker attached to the stitch) at the back. The ends of the cords with the stoppers on them will just dangle there in your way until you get past the first few inches. You can now begin your Kitchener grafting, feeding the stitches on both needles as you go. Because you’re Kitchener stitching in the round, you do not need to do the usual set up sts.

Finally, weave in the end of your working yarn with the duplicate st method (also shown in the video). Congratulations, you’re finished!

Wet block flat. I like using my mesh sweater dryer and a fan pointed at it overnight. Rotate it so it dries evenly and move the fold ends around and stretch the cowl a bit so it is the same width around.

Enjoy the warmth of your cozy cowl When Winter Winds Blow! About the Designer: Cindy Rook

Cindy Rook of Orange Smoothie Knits learned to knit and crochet from her grandmother. After a many-year hiatus, she returned to knitting and discovered luxury fibers, leading to a gigantic stash. In order to control her yarn population, she began designing her own shawls and cowls. 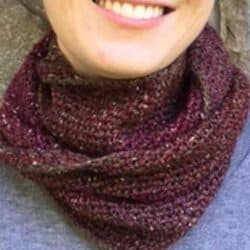 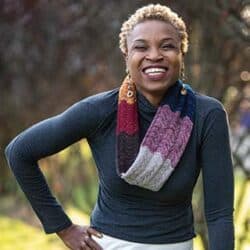 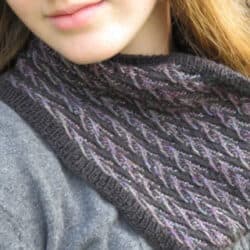