I love to walk on an empty beach when it is cold outside and there is almost no one, feel the fresh air in my hair, breathe deeply, the sounds of the waves gently lapping on the sand… Mmmmm ! So relaxing! I tried to put these feelings in a cowl. I love to have a squishy sweet knit cowl on my neck.

This is a nice project to reduce your stash.

Please be sure to print a copy after Sept 2nd as that was the last time errata was added.

Gauge is not critical for this pattern. This pattern is mostly worked in the round, unless otherwise stated.

There are 3 types of waves made in this pattern using short rows:

Change to US5 (3.75mm) needles. Join without twisting

Rnd 1 (and all odd rnds where mentioned): k to end, sm

Slip first 22 sts on needle to stitch holder. You will be working some of this section back and forth (NOT in the round) and others will be in the round. It’s not hard – just follow the instructions.

DO NOT pick up wraps as they will all be in garter stitch.

Row 1 CC2: Sm (both markers are now together on right needle)

Rnd 2 CC2 (in the round): join to first stitch of Row 1 CC1 without twisting, leaving MC tail on the OUTSIDE of the cowl (RS)

Back to cowl in the round

Sew the cable over the big wave section with a few stitches in order to maintain it to the same width than the remaining part of the cable. About the Designer: Valérie Verrier

Valérie has learned to crochet and to knit quite recently. She is a slow knitter, and this is now her zen relaxing daily therapy. She loves everything from the process, even skein winding with a nostepinne. And now she has even played with designing. What a funny experience!

You can find her on Ravelry as ValerieKnitsToo. 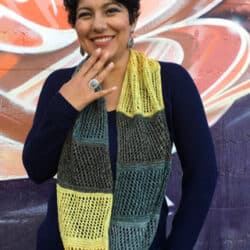 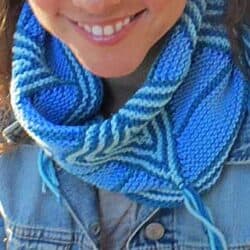