This pattern was inspired by the Greek myth of Andromeda, chained to a rock as a sacrifice for Cetus as punishment for her mother’s vanity.  She was rescued by Perseus and married him.  When Andromeda died, Athena placed her in the sky, near Perseus.

This pattern combines the chain lace pattern with the baby cable, and is topped with beads and a picot cuff.  The pattern is written denoting instep, sole and gusset, so that it can be knitted using dpns, magic loop or 2 circs. 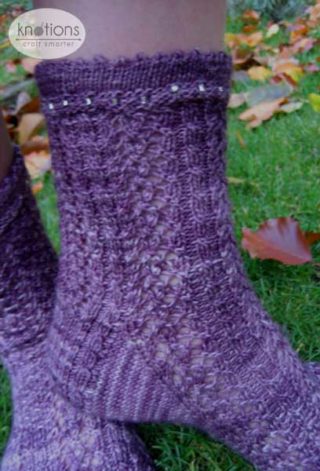 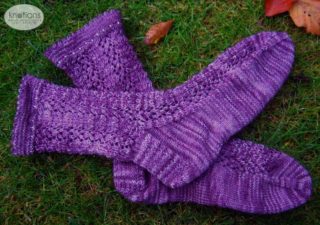 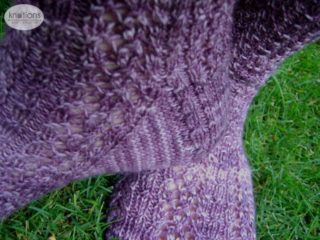 Work lace pattern as per chart until leg is approx 6 inches from cast on row, ending with row 6 of lace pattern.

Rep these 2 rnd until 62 sts rem. Cont without decreasing until foot measures 2.5in (6.5cm) less than desired finished length, ending with Rnd 2 of chart.

Adjust end of rnd by knitting the remaining sole sts so the new end of rnd is between the end of the sole and the beginning of the instep.

Repeat Round 1 only until there are 16 sts remaining (8 instep and 8 sole).

About the Designer: Polly Outhwaite

Polly knits and blogs at alltangledup.com. 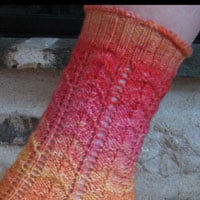 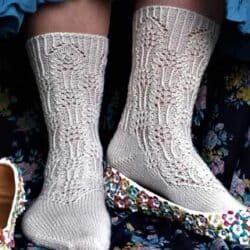 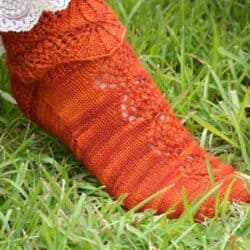 Put On Your Sunday Clothes socks by Tabitha’s Heart