Curling up on the couch to read a good book or bingeing on your favorite show demands the perfect, luxurious pair of socks to keep your toes toasty warm during the colder months. Euna Bedsocks are your go-to for hunkering down with a good cup of tea. Using a soft, squishy yarn and a broken rib designed to mold to your feet, these socks are just for you.

So relax, get that pot of Earl Grey steeping, and grab your favorite book for the perfect quiet time.

Pick up sts for a heel flap

~1”-3” negative ease is recommended. If you want a slouchier sock, go up a size. 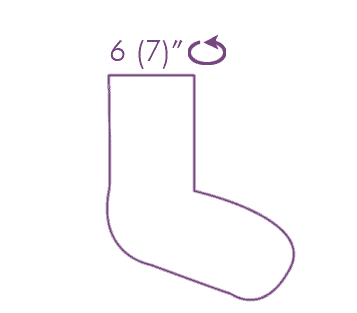 Euna Bedsocks are easily customizable – follow the pattern exactly, or if you’re handy with adjusting a pattern, add or subtract stitch or pattern repeats to create the perfect sock for you. 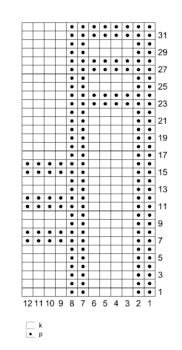 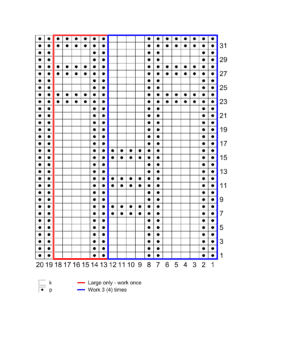 Using long tail cast on, CO 72 (84) sts, place marker and join for working in the round.

Work the heel flap flat across the first 36 (42) sts as follows:

Note: if working additional rows, you will need to pu extra gusset sts (1 st for each rep).

Arrange DPNs so that the beg of the rnd is now located in the center of the heel as follows:

You will begin knitting the foot by working Rnd 2 of the foot chart (Rnd 1 was worked in the Set up), repeating the blue section 3 (4) times, and the red section 0 (1) times.

Rnd 3: K across heel sts to front, work next rnd of foot chart, k to end of rnd.

Next Rnd: K bottom sts, work next rnd of chart across top, k to end.

Set up: Move 2 sts from each of the left and right side of top of foot to the bottom of foot needles; 34 (40) sts each on top and bottom of foot.

K across bottom of foot to left side of foot.

Graft together sts using Kitchener st and weave in ends.

Block very lightly to preserve and not stretch out the ribbing. ABOUT THE DESIGNER: KELLY G

In 2001 Kelly taught herself to knit by creating a truly hideous scarf full of dropped stitches and unintentional yarn overs.  Eternally stubborn and not to be dissuaded, she worked at it tirelessly until she had the fundamentals down, and never looked back. In 2014 she decided the next great thing for her to master was designing her own patterns, and despite many bumps in the road, her stubbornness again persevered, and her first pattern was released in 2015. To this day, Kelly still has that hideous first scarf she knit.

Kelly can be found online at kellygknits.com and on ravelry as tomatl. 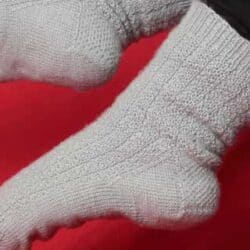 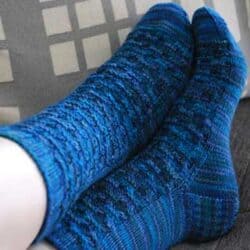