When one of my closest friends announced she was pregnant I knew I had to make her a blanket. It needed to be more interesting than just a plain old rectangle, as the mom-to-be is a very talented knitter herself. So the Bliss Blanket, named in after its recipient, was born.

The blanket is done in entrelac with a twist; rather than plain stockinette the rectangles are done in a mistake rib. The superwash wool is perfect for a new mom; just throw it in the washing machine, no muss, no fuss. 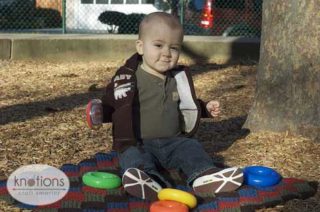 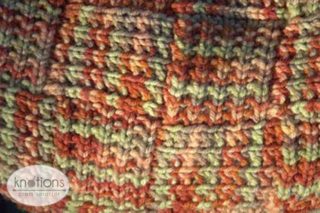 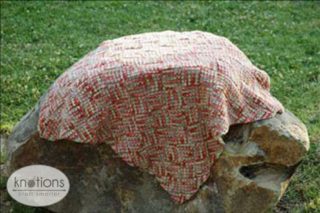 Note – The sample was knit from 3 balls each of brown and blue and 2 balls each of red and green.  The pattern uses the same amount of yarn in each color, so we’re playing it safe and recommending 3 balls of each color. We don’t want you to run out of yarn!

This blanket can be made wider or narrower by adjusting your cast on in multiples of 10. Work one more Base Triangle, one more Wrong Side Rectangle per tier, one more Right Side Rectangle per tier and one more Top Triangle per multiple of 10 stitches cast on. When starting the first Right Side Rectangle and all Top Triangles, the one st remaining on the needle from the previous triangle will count as the first of the 10 total sts you will need to pick up. A nice bonus to this blanket is that there is no binding off; the top triangles will close themselves off. To make the multi-colored version, simply use a new color of yarn for each tier.

K1, slip the stitch from the right needle back to the left needle, k2, turn.

With RS of work facing you Sl1 st from the right needle to the left needle, kfb,turn.

With WS of work facing you pick up 10 sts along the slipped edge of the Base Triangle, do not turn.

Pick up 10 sts along the slipped edge of the Base Triangle, turn.

Note that this last stitch will be the first ‘picked up’ stitch for the next rectangle.

With RS of work facing you pick up 10 sts along the slipped edge of the row below, do not turn.

Work Rows 1 and 2 8 times more, but do not turn on the last Row 2; Right Side Rectangle is complete.

With RS of work facing you pick up 10 sts (1 from previous triangle plus 9 new ones); do not turn.

Break yarn. Pull yarn tail through last live stitch. Weave in ends. Machine wash and then block out to a square to dry.

About the Designer: Melissa Goodale

Mel spends most of her time at her high tech day job and as such is forced to squeeze knitting into her off hours. A life long crafter, she is relatively new to knitting but has fallen hard for it. Her loving husband, son and two crazy kitties keep her company at home in the San Francisco Bay area.  Visit her at Stick Chick Knits. 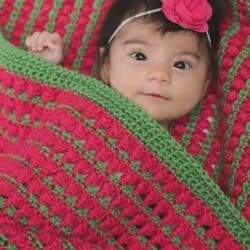 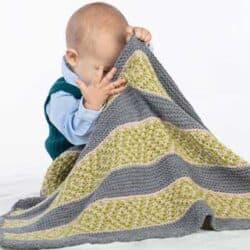 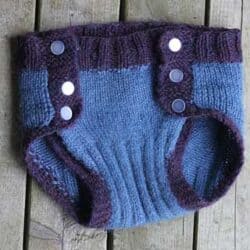